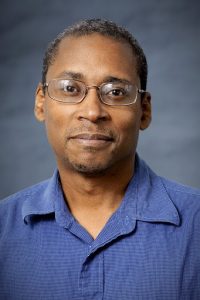 Donald E.K. Martin, an associate professor in the NC State Department of Statistics, is the 2017-18 recipient of the College of Sciences Faculty Diversity Professional Development Award.

Martin received the award for his contributions to promoting diversity in statistics and biostatistics, as well as his teaching, research and service. He has played an active role in both recruiting and retaining diverse students in the department. His mentoring activities have included participating in the Joint Statistical Meetings Diversity Mentoring Program, mentoring in the Math Alliance’s Facilitated Graduated Applications Process program, and serving in NC State’s inaugural group of dissertation mentoring fellows, who focused on diversity issues in the mentoring of Ph.D. students. He has also won several student-awarded teaching awards.

Martin’s numerous contributions to his department and field include serving as co-director of graduate programs for the Department of Statistics and on several departmental committees. He is an associate editor for the Journal of Statistical Theory and Practice and a member of the American Statistical Association (ASA) and served on the ASA Committee on Minorities in Statistics from 2000 to 2004.

The Faculty Diversity Professional Development Award was created by a private gift to the college to support professional development opportunities for mid- and early-career faculty members from underrepresented groups, as well as any mid- and early-career faculty who have demonstrated a commitment to promoting diversity among students and fellow faculty members. Martin plans to use the $2,000 one-time award to attend the 2018 International Workshop on Applied Probability in Budapest, Hungary.

Martin, who joined the Department of Statistics in 2007, holds a Ph.D. in statistics from the University of Maryland, College Park. His research focuses on time series and distributions of patterns in sequences.